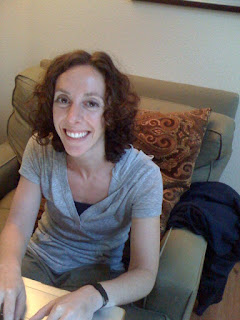 Here's where you get to know a bit of my back story.  It's also the only place you'll see photos of me :)

The Big Moves (a.k.a Home Is Where the Heart Is)
I grew up in Canada. 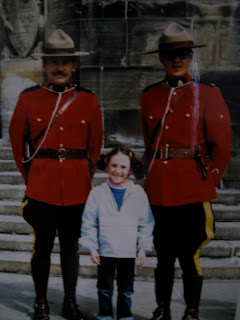 After getting my degree in speech-language pathology my husband and I moved down to Austin. (That's me and a friend of ours in the picture.) 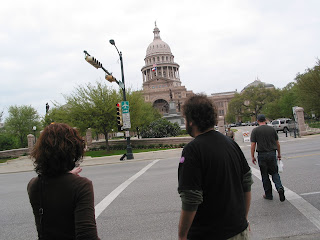 We lived there for 6 great years and then moved up to Seattle. 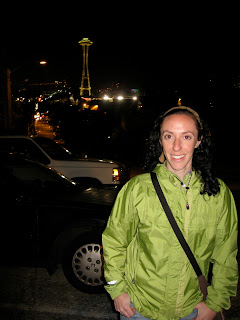 The Arts
I was once told by my third grade teacher that I couldn't draw.  I pretty much believed that until my eighth grade art teacher praised a drawing I did.  That was my last art class.  A few years ago I began getting the creative itch.  I got into mehndi: 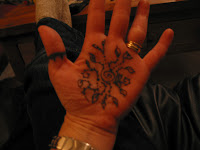 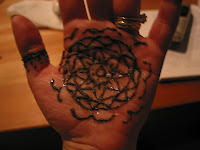 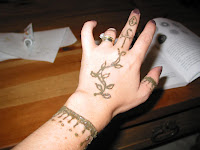 I started sketching and oil painting. 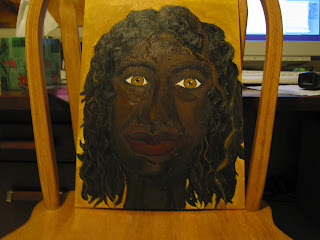 
My mom on her wedding day. 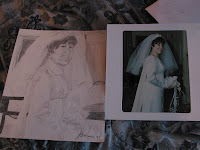 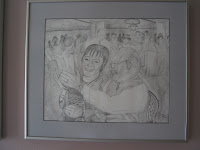 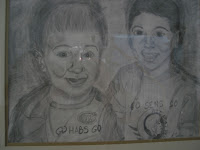 Some pumpkin carvings (why not?): 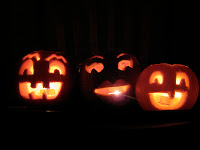 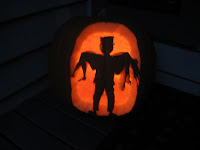 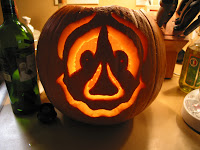 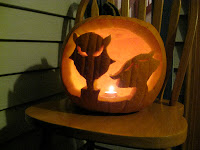 The Athletics
Where I grew up it was hot in the summer and cold in the winter.  I dabbled in was dragged into the wealth of sports offered year round.  Every winter the canal froze over and was open to the public for skating.  I would dutifully shuffle along until every exposed and unexposed part of my body was numb.  I cross-country skied for a couple of years with my parents on the weekends and then discovered downhill skiing and did that on the weekends as a teenager.  For five summers I attended a sports camp...I broke my leg on a horse the first year.

I did a *lot* of ballet and jazz.  I was in a pre-professional program with no desire or ability to go to the 'big show'.  I called it quits at the ripe old age of 14 and went into musical theatre.  I adored it. After high school my sports endeavours included intermittent spurts of going to the gym.

So what turned me into an "athlete"?  Peer pressure from coworkers to sign up for a triathlon with no prior experience.  You know, the usual.

I semi-trained and did not fare well. 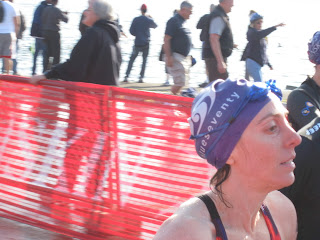 This is the last photo of me before I curled up and the paramedics came.

I thought about leaving the triathlon world far behind me after that experience, but then decided to tell the Danskin demon to suck it!  If thousands of others could do it, so could I! So I went back. 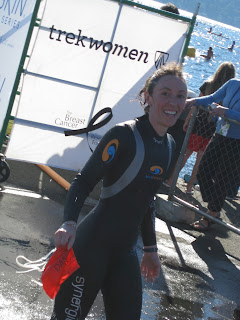 (Notice the wetsuit that time?)

And I finished the damn race! 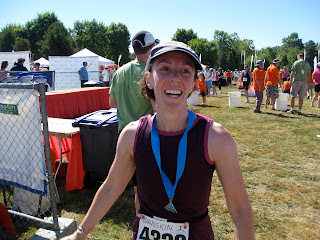 So then I went back again! 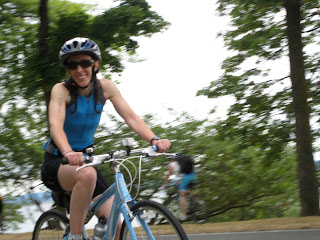 I also did a couple of half marathons along the way. 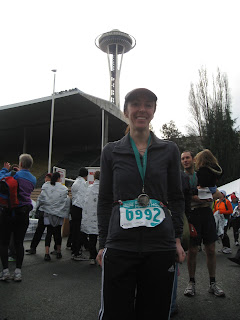 And then, a couple of full marathons! 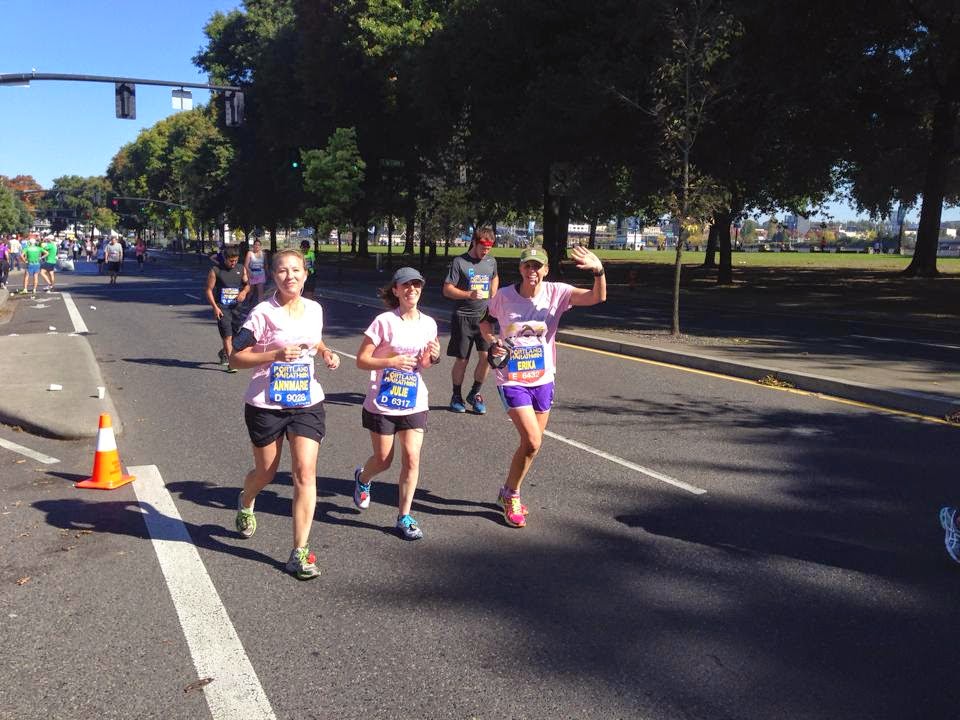 Here are some typical pictures of me: 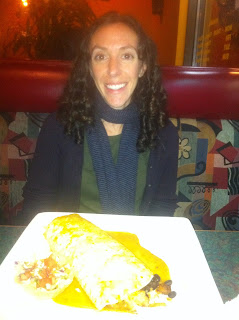 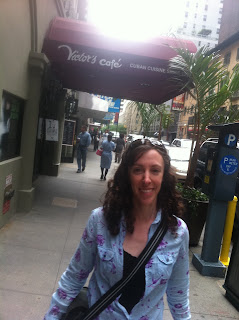 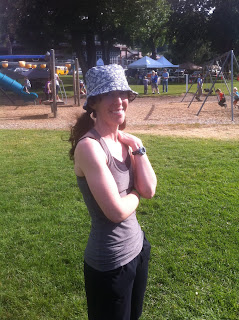 Every once in a while I get silly too: 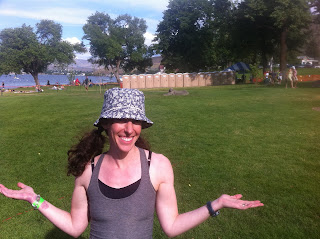 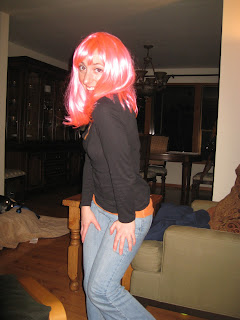 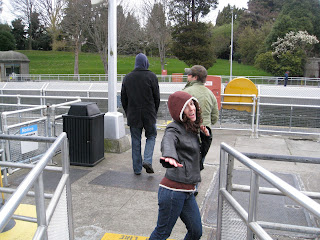 And just in case you were wondering how I draw my pictures, here's me in action (the wine really helps sometimes): 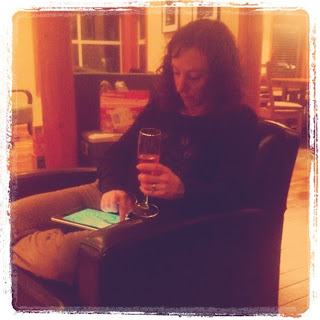 So there you have it. A little bit about little ol' me. Still want to know more?  Check out my video!